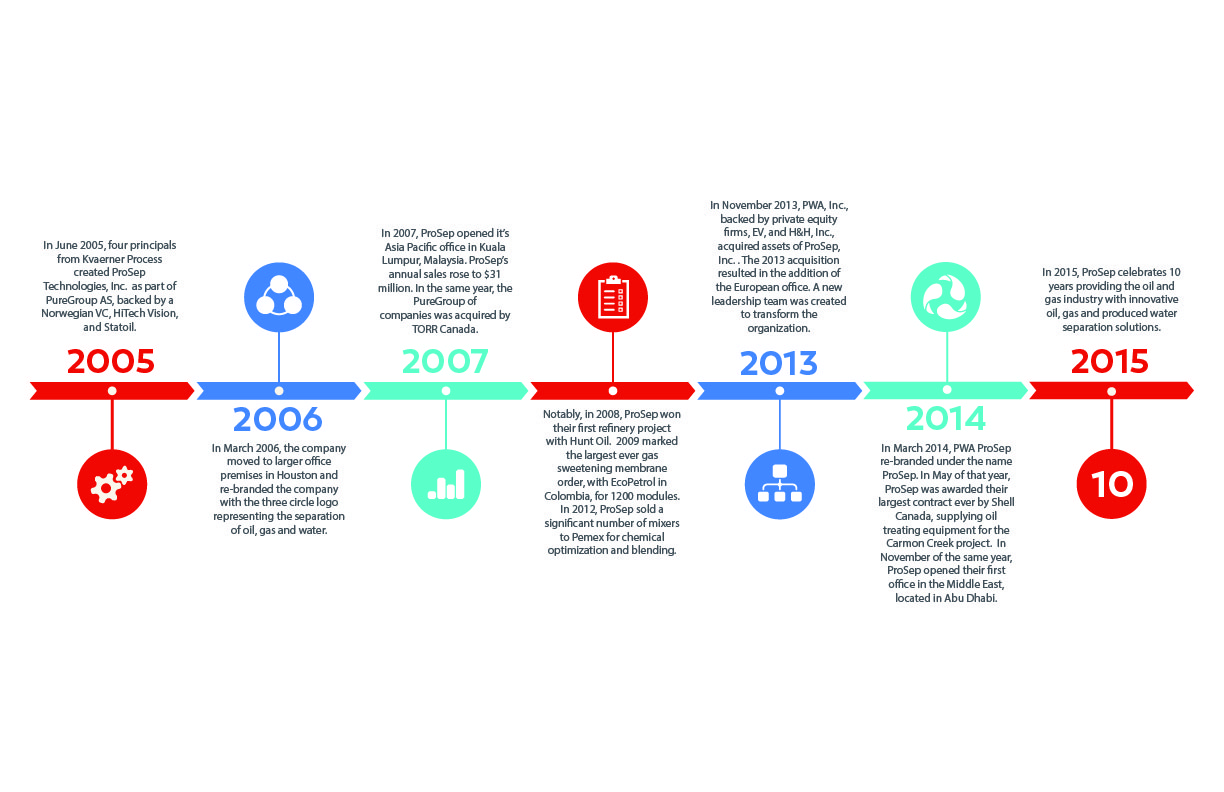 ProSep has been established for 10 years and has a prestigious history in the oil and gas industry.

In June 2005, four principals from Kvaener Process created ProSep Technologies, Inc. as part of PureGroup AS, backed by a Norwegian VC, HiTech Vision, and Statoil. By December of that year, the company had grown to 10 employees, and generated around $4 million in sales. In March 2006, the company moved to larger premises in Houston and re-branded the company with the three circle logo representing the separation of oil, gas and water. During this year, ProSep signed a supply agreement with a proprietary internals company and over the course of the next three years sold over $15 million of capital equipment with their internals.

in Kuala Lumpur, Malaysia. ProSep’s annual sales rose to $31 million and they created strategic partnerships to enhance their separation capabilities with organizations such as TDE. In the same year, initial talks with FujiFilm commenced and the PureGroup of companies was acquired by TORRCanada. In 2008, ProSep won projects with BP Alaska and Kuwait Oil Company as well as their first refinery project with Hunt Oil. 2009 marked the largest ever gas sweetening membrane order, with EcoPetrol in Colombia, for 1200 modules. Between 2010 and 2012, ProSep won additional notable projects with Kinder Morgan, Occidental Petroleum, and Williams. In particular, ProSep sold a significant number of mixers to Pemex for chemical optimization and blending.

In November 2013, PWA, Inc., backed by private equity firms, Energy Ventures, and Harris & Harris, Inc., acquired assets of ProSep, Inc. as part of a domestic and international expansion drive. The 2013 acquisition resulted in the addition of the European office. A new leadership team was created to transform the organization. In March 2014, PWA ProSep re-branded under the name ProSep, and launched their offering to the marketplace. In May of that year, ProSep was awarded their largest contract ever by Shell Canada, supplying oil treating equipment for the Carmon Creek project. In November of the same year, ProSep opened their first office in the Middle East, located in Abu Dhabi.